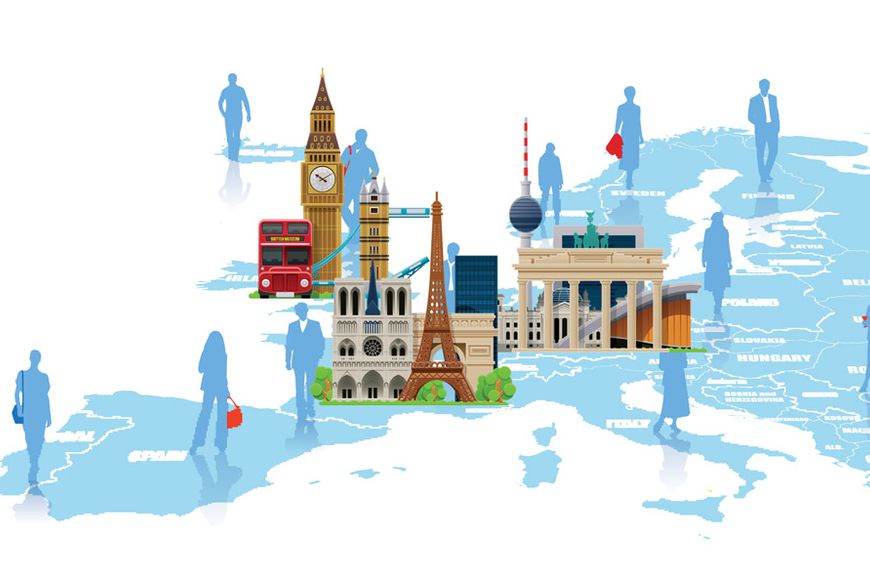 For many people, travelling abroad in order to get a job is an alluring perspective. Work experience in a foreign country will make your resume more convincing, as it proves your ability to adapt, step outside your comfort zone.

Additionally, many business directors consider moving their company elsewhere or expanding internationally. According to the Harvard Business Review, the necessity for globalization in the well-developed country of Great Britain has increased significantly, in the course of last year. The British website worldfirst.com has prepared a rating of the most attractive cities for those who are planning to move to Europe and find a job there. As a result of Brexit, London is gradually losing the position of the main financial center of Europe, while Dublin is gaining importance. For the time being, the Irish economy is on the rise. With a GDP of 7,8% it is far greater than in the rest of Europe – only 1,9%. As reported by the World Economic Forum, it is Ireland that will rise most prominently in 2016 (6,9%).

The country’s level of unemployment has dropped to 7% - a record since the year 2007. Presently, practically all major companies in the world, including Facebook, Google and IBM have their representative branches in Ireland. Lisbon: the most beneficial tax system

According to the PwC report, the tax system in Portugal significantly increases its attractiveness as a work destination. The rate of profit tax in Lisbon is fixed and amounts in 20%.

The Portuguese tax system also doesn’t impose large duty taxes for heirs to inheritance, businessmen, lessors, etc. There is, however, a small catch: if you plan to work outside of the tourist industry, learning Portuguese is obligatory. Stockholm: the birth of a new technology center

Stockholm is home of Skype and Spotify, plus it has the reputation of one of the largest technology centers in the world, after the Silicon Valley. Local taxes are high, but the standard of life is also on a parallel level.

In comparison to other European countries, the Swedish economy is prospering and the demand for qualified workers is very high. In the last 10 years the country sees considerable progress on many fields, including the sector of finance and entrepreneurship.

Other experts, however, warn about the difficulty in finding affordable accommodation in Stockholm. Czech Republic’s capital is located in the very center of Europe. It is literally at an arm’s length to Warsaw, Vienna, Dresden and Berlin.

The unemployment rate is 4,1%, according to the information for June 2016 – it is the second lowest figure among the European countries. Living costs are also much lower in Prague than in Paris or in London. Prague’s economy has recently gone through many changes – manufacture volumes have decreased, but a rise for the sectors of tourism and services can be observed. Financial services, information technology, consulting and advertisement sectors have also developed. Berlin is especially advantageous for finance and technological companies, specializing in e-commerce and developing mobile applications. Berlin sees an increase of transnational corporations with each year. Above that, Berlin is the best location for artists (designers, illustrators, etc.) on the start-up stage.