Slovenia: a country at the crossroads of landscapes and cultures. Part 1 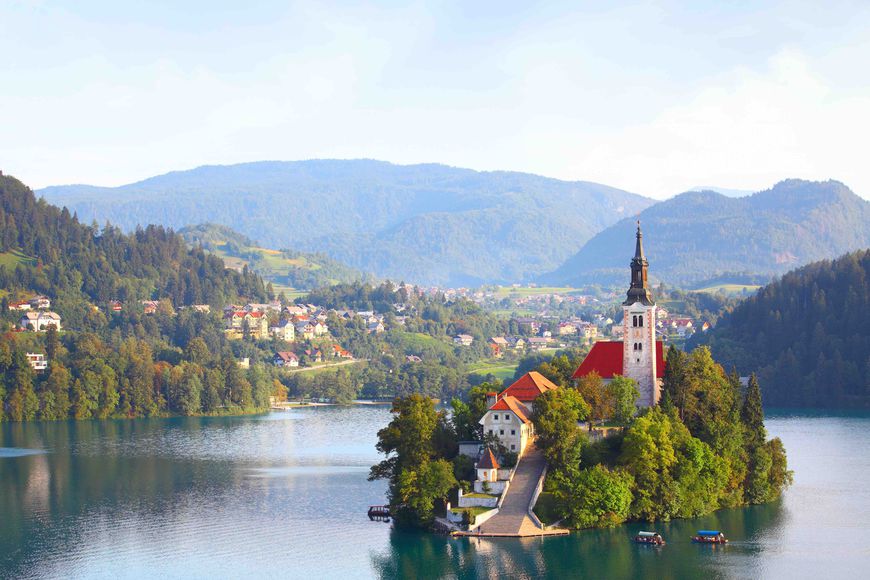 This small European country can boast of diversity: there are here snow-covered Alpine mountains, the Adriatic coast, the mirrored surface of the lakes, hot springs, valleys with vineyards and orchards. All the beauty of nature is wonderfully harmonized with European comfort. Open this scenic country and at the same time eyeing a residential property with Denis Korichnev, Director of Century 21 Slovenia (General partner of the Future Real Estate).

We can't say that Slovenia has always been known and promoted tourist country for foreign investors. Meanwhile, Slovenia is bordered by Italy, Hungary, Austria and Croatia, so it has absorbed the best cultural traits of its neighbors.

Slovenia has its own sea coast. But still before the most popular sea countries were Spain, Greece, and other more tropical countries, such as Egypt or Turkey. Then tourists from around the world began to discover Montenegro and Croatia. However, if Croatia has a large extent of sea coast, Slovenia has only 46 km of it. Due to characteristics of the currents in the Adriatic sea, the Slovenian coast is much cleaner than Italian. Slovenia borders Italy in the coastal area, so the Italians are frequent guests at the Slovenian seaside resorts that left a mark even on the dialect of the Slovene language in this area (the Slovenes from the coast say "A" in Italian style). Plus, prices in Slovenia are lower than on the Italian resorts.

The same is true for ski resorts. In Slovenia there are very good ski resorts, but most people prefer to ride in the promoted Italy, Austria, Switzerland or Germany.

In Slovenia there are more than 30 thermal springs. In the list of three best-known resorts with thermal springs, together with Baden-Baden in Germany (with highest prices), and Czech Karlovy vary are included the Slovenian resort of Rogaška Slatina. Rogaška Slatina is the best option in terms of "price - quality". Perhaps the thermal resorts is a part of Slovenia, which is the most famous between Russian-speaking population, most of the hotels and resorts here are focused and adapted to them.

Being part of Yugoslavia, Slovenia was one of the most developed regions with a strong industrial sector, infrastructure and energy industry. When Yugoslavia broke up, Slovenia survived it painless, the era of privatization has began, many objects were bought by foreign companies. Of all the former republics of Yugoslavia, Slovenia was first adopted in the European Union and introduced the Euro. The prestige of the country in terms of tourism began to grow, it became popular among Europeans. Now the hotel chain "Radisson" has entered the country, the construction of 5-star hotels is planned all over the country.

Most of the tourists traditionally goes to the countries with “best PR”. TO France for example, which for many decades has advertised itself as a country for tourists, to Austria, with its ski resorts, Germany, Italy, Spain, Greece.

And yet now foreign investors are beginning to discover Slovenia more and more. Every year there are more and more tourists here. Besides, Slovenia is a great road connection – from here you can reach any point of Europe. So from the Slovenian capital Ljubljana you can reach by car to Zagreb in 1 hour 45 minutes, Venice – 2 hours 30 minutes and Vienna - in 3 hours 45 minutes, Munich - in 4 hours 30 minutes, and Milan in 4 hours and 55 minutes. Relations with Russia and countries of the former USSR

In Slovenia all investors from Russia and former USSR countries on the rights are equal to local investors – it was signed the agreement. That is, if Slovenian in Russia is engaged in any business activity, invest money, earn, Slovenia can’t prevent the same action from the Russians. The government of Slovenia should not introduce any laws that may somehow restrict the rights of Russian investors on the territory of Slovenia. These rules work for Slovenian investors in Russia as well.

If you compare, for example, Slovenia with the Czech Republic, in this country the attitude to the Russian-speaking population is more cool. For a long time for the Russians it was a kind of starting point in Europe. But now in the Czech Republic the rights of Russians in living and investing are strongly limited.

The presence of the previously described agreement between Russia and Slovenia has a positive effect on the flow of investment into the country, evidenced by numerous transactions. Today, the Russians are the owners of a sufficiently large number of hotels in Slovenia, in the capital, on the coast, in Maribor and other regions.

The Russian company KOKS has redeemed the entire Slovenian industry of iron, in Maribor for €40 million was sold to a hotel chain, the Russians are actively buying chain stores, gas stations, etc. On the other hand, a Slovenian construction companies operate in Russia, including that they worked in preparation for the Olympics in Sochi.

Large company "KRKA" has its production in the pharmaceutical industry in Russia, 80% of their market is Russian. For the company "Gorenje", which produces household appliances and furniture, Russia is also an important segment. Prices for residential property in Slovenia

The average price is €1000 – €1100 per square meter. However, there is a huge variation in prices depending on the region.

The price for housing on the coast, near lakes Bled and Bohinj or thermal springs are about the same as in Ljubljana.

Which objects have the highest demand?

According to the census of 2008, in Slovenia there is a shortage of new buildings. So today are very welcomed all development projects for construction of residential houses and cottage settlements. New homes are sold out very quickly, of course, if the price is not too high. In 2015, Slovenia real estate has risen in price on 3 – 3,5%.

During the time of Yugoslavia mainly the houses were built– "for the children to live together." Now this mentality has gone, people are interested in home area of no more than 150-200 m2. That’s why on the market there are many large homes built in the 80-ies.

A huge number of people acquire commercial real estate in Slovenia, and they also consider Slovenia as a country where they would like to come from time to time. There is a demand on all kinds of objects - from huge villas and mansions, up to very small studio apartments. The process of buying

The procedure of buying of residential and commercial property in Slovenia is almost identical except that in the case of commercial property there is a stage of check of the tenant. Before transaction seller provides all documents related to the building permit, the object is checks for encumbrances and "dark spots" in the history.

The process of purchasing real estate:

1. Selection and examination of current proposals

3. Payment of 10% deposit to the seller or the agent/notary/lawyer on a trust account

4. Certification of agreement in the tax court and at the notary

5. Payment of the rest 90% after submission of the certified agreement and registration of ownership rights.

Foreigners before buying Slovenian real estate needs to open a legal entity here. Opening a company takes less than 1 week, the presence of the buyer is required for 2-3 working days. You don’t need to employ anybody to your company. Most often a 1 week is enough to open a company and prepare all the paperwork for registration of the transaction of purchase and sale.

The transaction takes about a month, the buyer's presence, as we indicated earlier, it is necessary only at the time of signing the contract.

Often after the payment of the second part of foreign buyers execute a power of attorney for the agent – it is needed for the subsequent signing of the act of acceptance transfer and the entering of property rights. If you don't want to give to the agent a power of attorney, you will need to come to Slovenia for the second time on 1-2 days in order to sign all the papers. So in total for the transaction you will need 1 or 2 visits to Slovenia. Foreign buyers can get a Bank loan for the purchase. However, in the case of purchase of commercial premises, banks can finance up to 50-60% of the purchase amount, and in the case of housing you will be financed less. Loan interest rate is 3% - 3,5%.

Investing in residential property: the pitfalls

In Slovenia the yield of residential premises reaches to 5%. Residential property can be rented much faster, as there are more tenants-Slovenes than tenants -companies.

But, as in any other European country, lessee is now protected by law. Tenant as an individual falls under the law on protection of consumer rights. To the lessee who is a legal entity, the law does not apply. Residential property is "faster" in terms of rent, but often it has difficulty in replacement of the tenant - debtors and defaulters can’t be evicted easily. Tenants know that they are quite strongly protected, so they can afford a lot.

About the peculiarities of investing in commercial property, how to obtain a residence permit and doing business in Slovenia, read in the second part of the article.

Property in country Slovenia
Request for a property